The “secret” passageway above the Ponte Vecchio

The Ponte Vecchio in Florence is undoubtedly one of the most famous bridges in the world. Its beauty and historical significance meant that it was the only bridge not to be bombed by the Nazis in WWII.

In 1565 the architect Giorgio Vasari built the “Vasari Corridor” for Cosimo I, in order to join between the political and administrative center of Palazzo Vecchio with the private dwelling of the Medici, the Pitti Palace, across the river. The elevated corridor is about one kilometer long and was built in just five months. It begins at the Palazzo Vecchio, passes through the Uffizi Gallery, then runs along a part of the Arno embankment; it then passes over the shops on the east side (left) of the bridge, at its end going round around the Mannelli Tower, supported by brackets and continues onto the south shore of the river (“Oltrarno”) all the way up to the Pitti Palace.

The Ponte Vecchio was not bombed by the Nazis, but the access points to the bridge were destroyed.

In the frantic days of the liberation the Vasari Corridor was the only way to move between the north and the south of the city. This can be seen in the Florence section of the film “Paisà” by Roberto Rossellini, where the main character walks unnoticed through a bare Gallery Uffizi full of ancient statues which have been packed up. 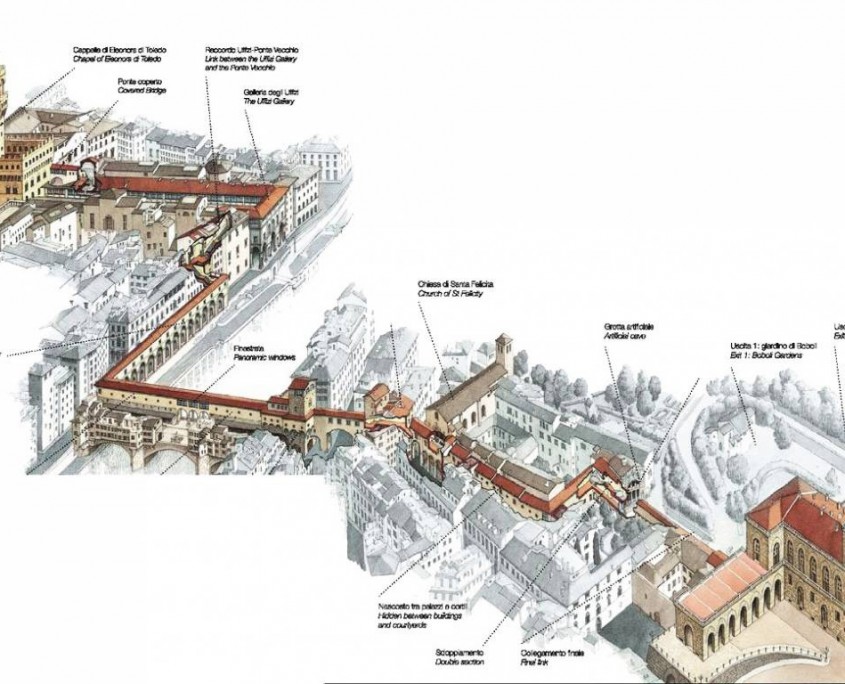 Our love affair with kabocha (aka green hokkaido)

The vegetarian population is growing fast in Italy: and they have so many delicious...
Scroll to top